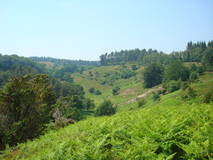 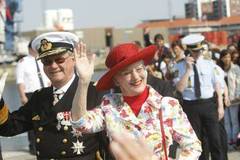 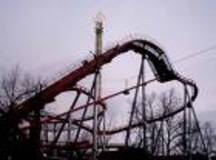 Queen Margrethe in horse carriage with minister of environment Troels Lund Poulsen, minister of trade Lene Espersen and director with the Forrest and Nature Administration Hans Henrik Christensen at the opening of Mols Bjerge National Park on Saturday.

A new beautiful national park is ready to welcome the Danes. In spite of a fierce fight from angry local land owners Mols Bjerge in Djursland comes next after the first Danish national park which was opened last summer in Thy.

Nearly two thousand people in the sunny hills witnessed the queen's opening of the new national park Mols Bjerge. The park is more than the hills themselves with more than half a million annual visitors. The new national park only 40 kilometers from Aarhus covers 180 square kilometers of which a quarter is a preserved area. According to minister of environment Troels Lund Poulsen (V) the major purpose is to secure better Danish nature and make sure that as many people as possible can visit the area.

"It is a development that will happen over a number of years. We shall strengthen the nature in a balance between utilization and preservation. National parks are a long term project building on a solid basis of  local support", the minister says.

The fact that local land owners have strongly opposed the project in fear of the burden of tourism is not surprising according to the minister.

"The idea of national parks is still new. However, a few groups must not get in the way, and I have tried to accommodate their wishes by giving them seats on the board", the minister says.

According  to the queen a certain responsibility lies on the Danes to look well after nature..

"Danish nature is not a wild one but very much man made and much more vulnerable than pure wilderness.  It is therefore easy to harm it. The national parks can on the other hand be part of something good" the queen said  before riding in open horse carriage through the new  national park.

Three more Danish national parks are on the drawing board: Skjern Aa, Vadehavet and Kongernes Nordsjælland.

"Congratulations on turning Mols Hills into an amusement park" our neighbour wrote in a letter to the editor. No doubt the majority of the land owners will question the wording "solid basis of local support". Worse political windbaggery must be hard to find.